PC Powerhouse Dell just unveiled their newest version of the XPS 13 (9380) and the new Latitude 7400 2-in-1 at CES 2019. As a small business owner, a laptop PC is a critical part of your operation. If you’re in the market for a new commercial or personal laptop, Dell just knocked it out of the park so, check out the latest updates on two laptops that would serve your business well:

At the conference, Dell introduced the Latitude 7400 2-in-1, flaunting it as the world’s smallest commercial 14-inch 2-in-1. It’s easy to be skeptical about 2-in-1s, but the Latitude 7400 is the real deal. The Latitude 7400 2-in-1 features Intel 8th Gen Core Processors and boasts “multiple workdays,” or up to 24 hours, of battery life off of a single charge. Dell also equipped it with what it calls ExpressCharge which gets the battery charged back up to 80% in an hour. If you happen to find yourself somewhere without Wifi, the Latitude 7400 2-in-1 has comes equipped with CAT 16 Gigabit LTE. The drop hinge and narrow bezels contribute to a starting weight of just 2.99lbs. For security, Dell has included a fingerprint reader and an optional contacted and contactless SmartCard reader.

The Latitude comes packed with options, but the sweetest thing about Dell’s new commercial flagship is a brand-new feature called ExpressSign-In. It’s the world’s first PC to use a proximity sensor powered by Intel Context Sensing Technology. The Latitude detects your presence and wakes up in about one second, scans for facial recognition and logs you in with Windows Hello. When you step away from your computer, it will recognize that you’re no longer there and lock itself. Now that’s some cool tech!

Not only is the Latitude 7400 2-in-1 loaded with awesome features, but it’s also pretty to look at and feels great, too. It will be available to purchase in March and starts at $1599.

The “nosecam” is no more! The bottom-mounted webcam that lent itself to a world of double chins and unflattering angles is a thing of the past. Dell moved the webcam to the top bezel, where it belongs, and the 2.25mm HD camera has little impact on its InfinityEdge display. The small camera takes surprisingly crisp photos and videos. The XPS 13 also comes with nothing less than the best, 8th Gen Intel Core Processors. The display is more vibrant than ever with the new addition of Dolby Vision and is the first laptop in the Dell line to boast this feature.

The laptop comes with the same port setup as it’s predecessor with one USB-C 3.1 port, two Thunderbolt 3 ports, a microSD card slot, and a 3.5mm headphone jack

The new color options are silver-on-black, rose gold-on-white, and an all-new color Frost Silver-on-white. The interior maintains the same glass-fiber weave. Dell announced a staggering 21 hours of battery life from the Core i5 processor and Full HD display model and up to 12 hours from the 4K model with the Core i7 processor.

At 11.9 x 7.8 x 0.3~0.5-inches, the 2.7-pound, this baby is light! While laptops this small usually have trouble staying cool (which affects performance) Dell has added GORE Thermal Insulation, the same stuff that’s used in the Mars Rover, to help dissipate the heat.

Coming in at $899, the Dell XPS 13 remains a strong performer at an excellent price point. 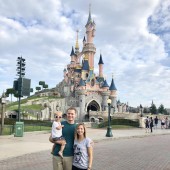 Katherine Mines is a content writer and regular contributor to smallbiztechnology.com. She is a U.S. Air Force veteran who leverages her personnel, manpower, and professional writing experience to help small businesses owners succeed. Her passion for helping businesses informed on the latest tech and trends shines through in the expert industry coverage she provides.

How to Choose Payroll Software for Your Small Business

5 Reasons Shipping to Consumers is Changing