Finding Success With A Business In A Taboo Niche Market

After an unlikely meeting at a Wix event, Ramon Ray took the opportunity to talk to Crystal Etienne, the founder and CEO of PantyProp. This business solved a problem that most people don’t like talking about – women who cannot use tampons or other insertables, but still want to live a life without worrying about uncomfortable menstrual pads.

Etienne created a full line of products for women of all ages and sizes. The product line includes not just panties, but sleepwear, swimwear, leggings, and bodysuits, too. PantyProp also has discreet, leak-proof underwear for men, too. Etienne has solved a problem in a variety of ways.

PantyProp was created in 2015 and is now a multi-million-dollar company. When asked about how she became so successful so quickly, Etienne attributes it to being self-taught:

“I never told myself no. If I wanted to do something, I did it. When I wanted to write my patent, I didn’t want to pay someone $7000. I actually read the website. Called the phone numbers. Then, I moved to Virginia for 30 days. It really is true!”

Why PantyProp became so successful

Etienne attributes her quick success to being able to teach herself what she needed. She came from a business background, so she understood numbers. She taught herself to make a website. She taught herself how to talk to people without being too direct. She said about her success:

“It was hard work, but it didn’t feel like it was. I was thinking big and figuring out what I needed to do.”

She quite literally started the business from nothing. Etienne attributes much of her success to luck, because she created a product that solved a problem that bothers people. One day, she was aggravated by using a menstrual pad and in her anger, she created the idea. It just turned out that other people were bothered by the same product and found that her products could ease the bother.

Word of Mouth and Wix– A Killer Combo

Along with luck, word of mouth marketing helped, too. When Etienne first started out, she designed her website – using Wix – and when she wasn’t busy, she would tweak it – again being self-taught. Eventually, she got to the point where she wanted to just make 10 sales per day. At this point, she had tweaked the website several times and started to write content, which wasn’t great at first. After a while, people began sharing her products with their friends. Etienne did it all – by herself, but she tried to make her customer interactions feel like they were corporate in nature. She lived by “fake it until you make it” and it worked.

When Etienne knew she made it

Etienne remembered the day that she knew she had made it. In March 2016, she went from 10 sales to 50 sales overnight and she had to bring in a real customer support team. She was worried that the 50 sales was a fluke, but it wasn’t. She isn’t quite sure what triggered the sales, but she gives some credit to small marketing boosts, like $10 per day. She reminisced about how stressful it was when she went from $10 per day to $20 per day. Now, she spends significantly more on marketing.

Marketing to Her Customer

Etienne knows her customer, and believe that’s what helped make PantryProp successful. Marketing is still a mystery to her, but she knows who her customer is because she has asked them questions. She doesn’t do a hard sell on her customers, instead, she tells them directly what the product does. She doesn’t just tell customers something to make a sale, she tells them because they need to know the details. She takes great pride in being able to tell a customer not to buy everything, but to only buy what they feel comfortable buying.

Etienne also credits Wix with helping her get started. She used their online store and Wix helped her design an online store that was pretty and presentable. All she had to do was drag, drop, and implement a button. She continues to use Wix because it has grown with her. She considers her product a “taboo” product, but Wix has made it presentable and intuitive for the customer. Wix also helped her build the live chat feature that has become a vital feature.

PantyProp currently has 16 employees, including Etienne. She has never had any turn over because she treats her employees so well. Her return policy showcases how she cares about people: Because the product is a hygiene product, customers cannot return items, but they can make exchanges as long as the products are not worn or washed. Etienne donates returned products to a women’s and children’s shelter.

When it comes to hiring, Etienne has useful advice based on her journey as a small business owner. As her business was growing, people continually told her to hire staff. She didn’t do what people told her. She made her first hire when she realized that she needed someone to help her with something that she couldn’t do herself and didn’t have time to learn. She has continued this logic when it comes to adding staff. 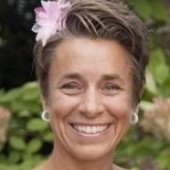 Kristen Bentley is a veteran high school English teacher who has been a freelance writer for several years. She even teaches a freelance writing course to high school seniors. As a former small business owner, she understands the stages from writing a business plan to hiring the best people.

3 Ways Technology Is Changing the Face of Email Forever

The Power of Video with Jason Hsiao of Animoto